Beginning March 2008, the free IBM Lotus Symphony office productivity suite --based on the open document format (ODF)-- achieves its Beta 4 evolutionary phase. As is expected of continued Beta software, we found some issues that deserve the attentions of the developers targeting the Linux operating system.

At Metztli IT, we installed Symphony under three(3) Linux distributions to test the installation routine and to explore the early functionality of the WebSphere (language) Translation Server (WTS) plug-in. Additionally, we wanted to test the language module plug-in: Symphony developers are addressing the language needs of the world. There isalso a Developer Toolkit for those that want to create additional plug-ins and composite applications for the Symphony framework.

For instance, upon selecting to download Symphony Beta 4 for Linux, we explored the languages available for Symphony as plug-in modules; there were Arabic, Chinese, Czech, and Spanish, amongst a pull down menu of other module plug-ins: 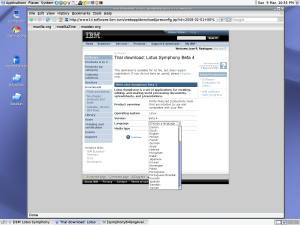 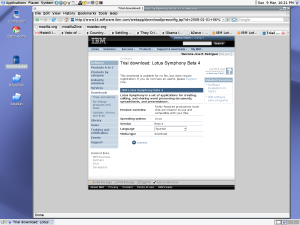 But make sure to place a check mark next to both, Lotus Symphony Setup for Linux and the Language Pack that you selected priorly: 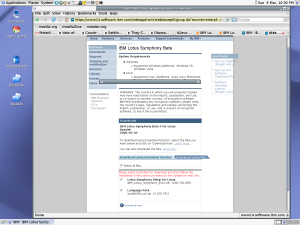 As in prior betas, Symphony Beta 4 requires super user (or root) privileges under Linux. Under OpenSuSE 10.3 there is no need to export any variables ?unlike Symphony betas 1 and 2. After downloading the IBM_Lotus_Symphony_linux.bin into a temporary directory we simply followed the procedure we described under IBM Lotus Symphony (first) beta --reiterating, however, that under OpenSuSE 10.3 the export directive is unnecessary.

Even as a Linux workstation single user ?since long ago-- we know that super user (root) privileges are only necessary to install applications in other than in our home directories ?a notion that MS is just beginning to implement in their operating systems. Symphony, by default will suggest the root privileged directory of
/opt/ibm/lotus/Symphony
as its installation path. But even if you want to install Symphony in your home directory, you will need root privilege. Accordingly, acquire super user or root privilege before initiating your Linux Symphony installation (again as described in prior mentioned blog post).

However, as soon as the Symphony installation completes successfully, assign the directory and files to an regular user who will be using the Symphony office suite. ?Why,? you might ask, ?if Linux is by design a multi-user operating system, should an single regular user own the root installed application?? Obviously, if the application is installed by the super user, then every Linux user of the workstation with the appropriate privilege(s) assigned should be able to access Symphony, right? Well, partially.

The current release of Symphony beta 4 that we tried (as of 03-10-2008) will not allow plug-ins installed with root user privileges to be accessible by an regular user. And Symphony directories and files installed by the Symphony application should be assigned to an regular user who will be using Symphony BEFORE the installation of plug-ins, like languages (other than English), the WebSphere (language) Translation Service (WTS), and the forum support plug-in. This is a bug that should be fixed, of course.

For instance, while wielding root privilege and the IBM Lotus Symphony installation just finishes, a similar screen as the following will have a default check mark that will start Symphony as root: 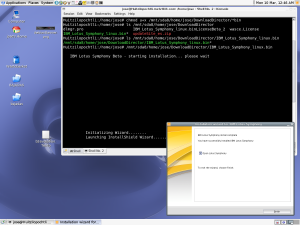 You may want to allow Symphony to proceed and start up as root (by leaving the default check mark) by pressing the Finish button but do it only to test Symphony. In other words, do not install any plug-ins whatsoever because only with root privilege those plug-ins will be useable. As an regular non-root privileged user you will not be able to use or even install (or reinstall) those plug-ins. 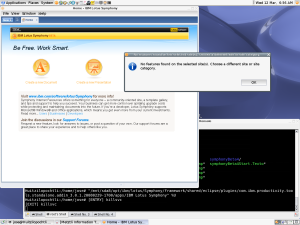 The snapshot below shows that when the WebSphere (language) Translation Service (WTS) plug-in has been installed with root privilege, an regular user will not have the WTS plug-in available (or the Spanish or other language plug-in module): 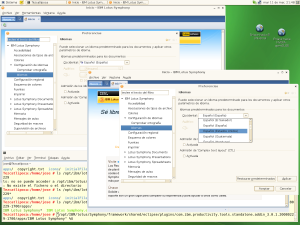 The WTS icon (a small earth globe with an ABC label across) is shown in the root privileged instance of the upper screen Symphony application; whereas the lower non-root instance of Symphony will not make available the WTS to the regular user. The same holds true for the Spanish [Español (España)] plug-in module: the absence of a language blue/green check mark across an ABC label in the lower Symphony instance reveals that it is inaccessible to the regular user.

SINGLE USER LINUX WORKSTATION WORKAROUND FOR NON-root USE OF SYMPHONY WITH PLUG-INS.

Well, change the ownership of the directories and files created by the Lotus Symphony Beta 4 installation from root to an regular user of the Linux workstation. Assuming an default directory of Lotus Symphony:
/opt/ibm/lotus/Symphony

Assuming, also, an Linux regular user name of tlaloc with a home directory of
/home/tlaloc

who belongs to a group named users, this is how you would assign the Lotus Symphony directory and file resources from an root user with an root group to a tlaloc user with a users group --provided, of course that you acquire root privilege (since that is how you installed Lotus Symphony, right?):
chown -R tlaloc /opt/ibm/lotus

and proceed that recursive change of resource ownership command with the equivalent for the change of group:
chgrp -R users /opt/ibm/lotus

Once you assign the Lotus Symphony resources to tlaloc, you can log back (or become) the regular user tlaloc and proceed to install the WTS, language, and forum post plug-in modules.

HOW TO INSTALL THE CURRENT TYPICAL PLUG-IN MODULES BY AN REGULAR USER.

Click in your Linux Desktop icon for IBM Lotus Symphony application initialization. If you had not changed the user and group ownership as elaborated immediately in the above section, you would not be able to install the plug-ins by simply clicking in the Symphony icon to start the productivity suite --as opposed to MS users, we do not use the super user privilege for our mundane everyday computing tasks, do we??? 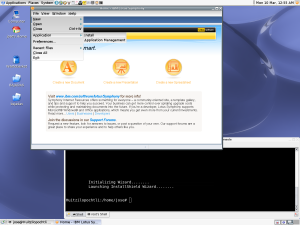 A dialog labeled Install/Update will appear. Select the radio button: Search for new features to install. Subsequently press the Next button. 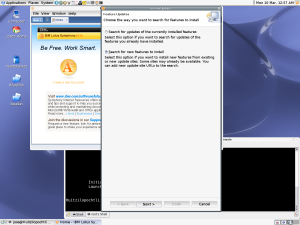 Assuming that a plug-in module language file with an file extension ending in zip, as is the case for the Spanish language plug-in module, was downloaded into a temporary directory, select from the next dialog the button labeled Add Zip/Jar Location.

Another dialog will prompt the user to select the downloaded plug-in module from the local site archive file system. Proceed to find the temporary directory where, in my case, the Spanish language plug-in module (updateSite_es.zip) resides and select it. Another smaller dialog will show our compressed file in the upper field and its encapsulated jar file: 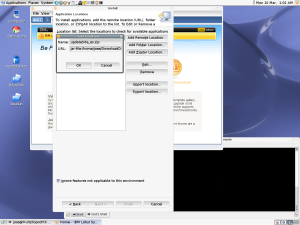 Another dialog labeled Updates will appear containing the module to be installed. Notwithstanding, note that the small left white square next to the language plug-in name is empty and, additionally, the bottom of the container entry field states: 0 of 3 selected. 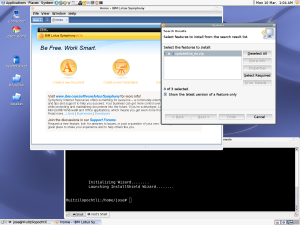 Make sure to check the small white square with your pointer. Subsequently, the bottom of the container entry field will change to: 3 of 3 selected. You can verify that all the features will be installed by selecting with your pointer the small arrow to expand the contents of the language plug-in module: 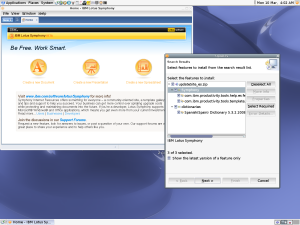 Select the Next button and accept the license agreement by marking the appropriate radio button. The user will be presented with an informative dialog about the feature(s) to be installed and the approximate space that those will occupy in the user hard drive. 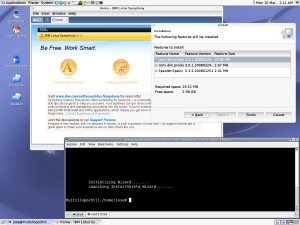 Select the Finish button to complete the procedure. Subsequently, Symphony will restart and the language plug-in will be available to be used from the menu item File => Preferences and expanding the small arrow next to the label: IBM Lotus Symphony.

NOTE: suggested commands entered at the Linux shell(s) prompt are provided on an as-is basis. Although due diligence has been applied, the information may not be accurate under all circumstances. Accordingly, please do not hold Metztli IT responsible if unforseen effects are experienced. You are not obliged to use the information provided.