No, it is not a coincidence. Or possibly it is. But I happened to come across the GNU/Linux Debian/Ubuntu based Symphony One 2008.1 operating system during an recent foray into the search term “Symphony” and its related search associations. At the same time (almost) I had downloaded and installed the new, end of August 2008, IBM Lotus Symphony 1.1 release into an 32-bit GNU/Linux Debian unstable. And I thought, would Symphony One 2008.1 and IBM Lotus Symphony 1.1 get along? 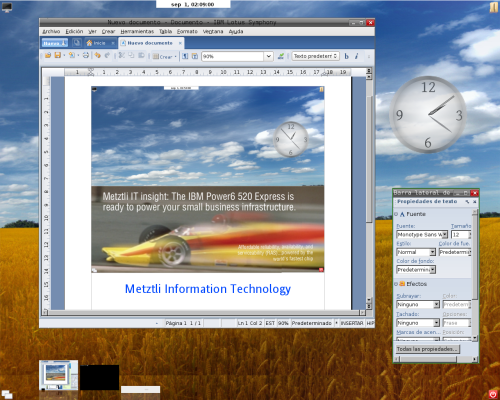 Having successfully installed the previous IBM Lotus Symphony 1 under 32- and 64-bit versions of Debian and Ubuntu, I assumed that this new release of Lotus Symphony office productivity suite would easily install into SymphonyOne operating system. And I was correct.

I downloaded an live installation media CD from the SymphonyOS web site, of course, after realizing that Softpedia apparently does not host the image despite the claim otherwise. 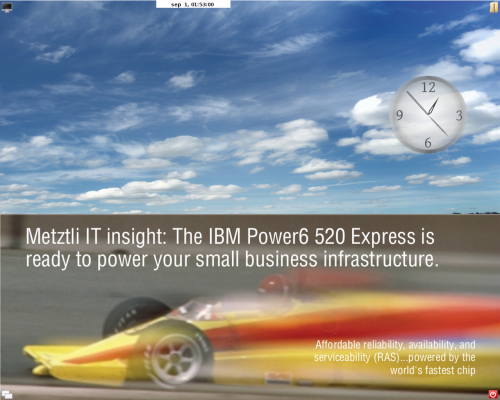 I decided to install it under one of my multi-boot dual processor machines, where my LVM enabled OS/2 Boot Manager (LVM-BM) rules over a couple of OS/2 and two GNU/Linux partitions/volumes. I used the OS/2 boot manager to create a 4GB partition and a 500MB swap partition. Subsequently the 4GB root (/) partition would be set as bootable by OS/2's LVM-BM, at the same time adding the SymphonyOne partition to LVM-BM list of bootable partitions. 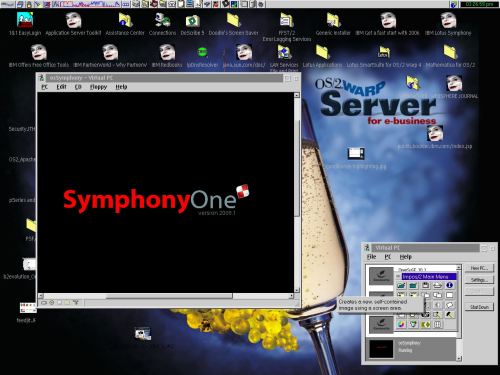 I must note that SymphonyOne, as well as some other GNU/Linux distributions, did not recognize an ancient Western Digital IDE hard drive. It did, however recognize my equally ancient SCSI hard drive and there is where I partitioned with OS/2's LVM-BM.

Proceeding the burning the live CD-media with SymphonyOne's downloaded image, I placed it into my DVD drive and rebooted my machine. I have my reservations about live CD-media distributions due to past bad experiences. Notwithstanding, SymphonyOne booted into my ancient system and, after some time adjusting itself to my system, I saw the cool background image; but it was not centered –it was tiled on an screen resolution of 1280 x 1024. Nevertheless, as opposed to past experiences with live (or semi-live) USB and CD-media based distributions, SymphonyOne recognized my IBM NIC card and had no issues receiving an DHCP offer to connect to the Internet. Subsequently, I would install SymphonyOne into my physical SCSI hard drive by selecting the lower left icon and its subsequently appropriate menu item.

After stitching SymphonyOne's cool background image with the GIMP and adding an extra strip of wheat field, continuing under the GIMP, I resized it to become the right resolution for my screen. Indeed, it is a beautiful background that Hana might have liked. The transparent clock desklet adds a touch of mysticism to the blue, cloudy sky. Apropos, SymphonyOne desklet is available, among others, at the adesklets.sf.net --as explained in the file
/usr/Applications/desklets/aanalogue-0.1.0/README. 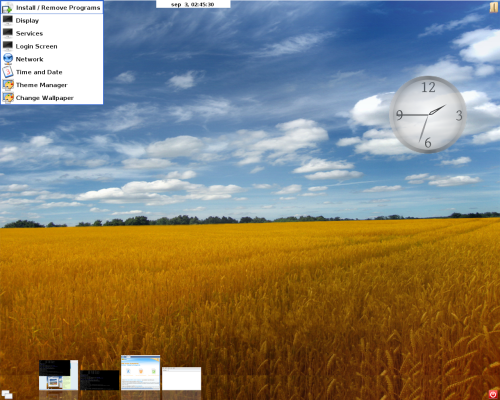 If you happen to accidentally close your cool clock desklet, simply open a command prompt and type: adesklets to restart your clock again. And looking around SymphonyOne minimalistic desktop, it reminded me of Window Maker [http://en.wikipedia.org/wiki/Image:Wmaker-0.80.2.png] --simple yet fully functional. Minimizing an application, lowers its icon to the bottom of the screen –unobtrusively. On the other hand, if an application is covering those icons, an user needs to minimize the application and subsequently select the other (previously hidden) desired one. Possibly an method or hot-key combination could be employed to bring up a list of minimized applications so that the current fully opened one could be left untouched.

But, would IBM Lotus Symphony 1.1 install easily into SymphonyOne 2008.1?

My engagement taught me that as long as the proper libstdc++.so.5 libraries are installed IBM Lotus Symphony 1.1 will install easily. Notwithstanding, as detailed in my previous blog post titled, IBM Symphony GA 1 on Ubuntu 8.04, I became the root or super user under SymphonyOs 2008.1 to install the IBM Lotus Symphony 1.1 by opening an shell from the left lower icon on SymphonyOne Mezzo Desktop; and then typed as follows:

and the user will be required a new password for the root account. You will be required to enter the password twice because the system will want to verify that you in effect can remember your super user password --make sure to use lower and upper case characters, as well as numbers and other allowed characters for security purposes. After the system accepts your root password, type the following to become the super user:

and enter the password that you just created above. After the system accepts your password, you are ready to install the new IBM Lotus Symphony 1.1 into your system. Install the required libraries by typing: 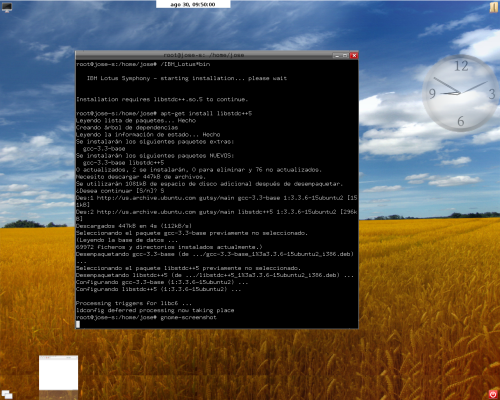 Following the successful completion of that step, type at your shell prompt (assuming, of course that your IBM_Lotus_Symphony_linux.bin is at your current directory location):

And your Lotus Symphony intallation splash screen should start and a subsequent welcome screen will follow, as seen below: 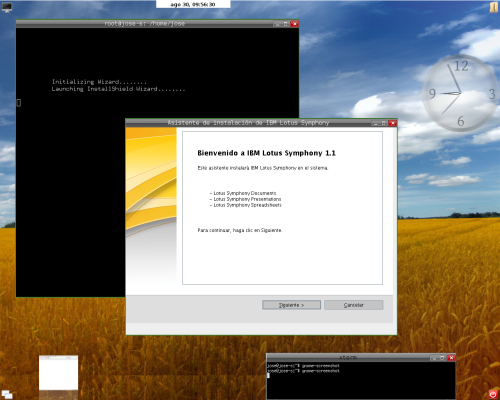 If rather than starting the Lotus Symphony installation, your shell prints an error stating:

Then, you need to make your IBM_Lotus_Symphony_linux.bin executable by typing at your shell prompt as follows:

and then attempt once again your Lotus Symphony installation. If everything goes well, as it should, an series of subsequent screens similar to those that follow will proceed --as you advance the installation by selecting the appropriate buttons.

For instance, the accept the license agreement screen: 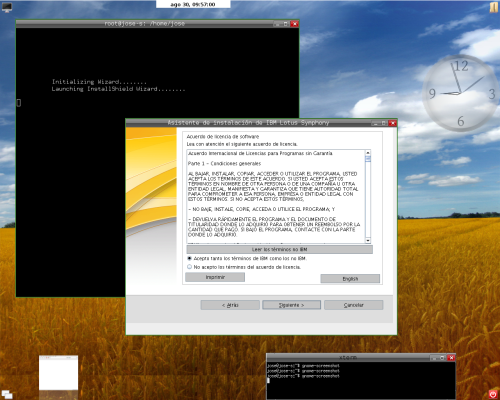 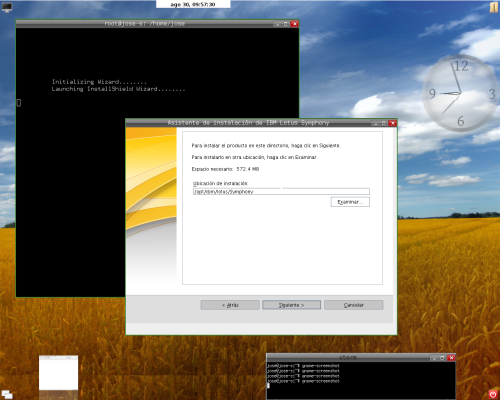 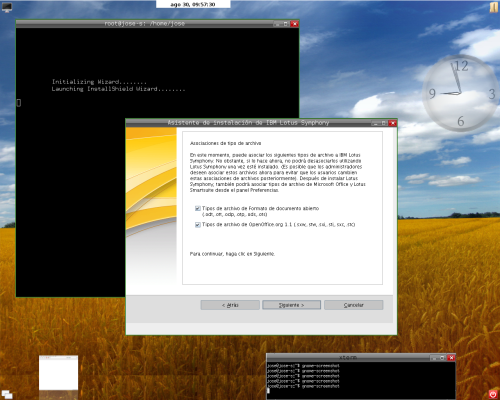 And verify that the information is correct at the next screen; otherwise press the back button. 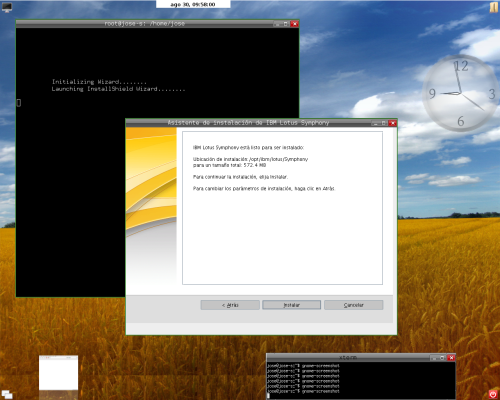 After pressing the next button, the Lotus Symphony installation proceeds and we can see the status bar showing the approximate sequence of components installed. 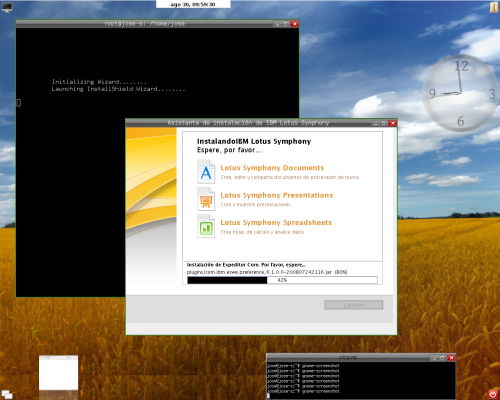 Clearly, the Lotus Symphony installation will reach 100% and at that point it will stay slightly longer. Let the processes finish. 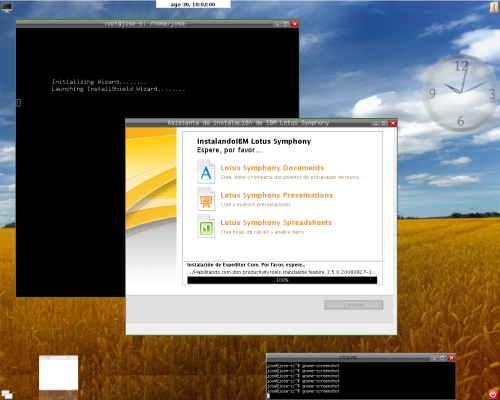 After the Lotus Symphony installation routine finishes, leave the check mark in the small square, hence allowing symphony to test the Symphony office productivity application --still as the root user since we began the procedure as root, remember?. Selecting the Finish button will close the window and subsequently restart Lotus Symphony application with an initial splas screen as below: 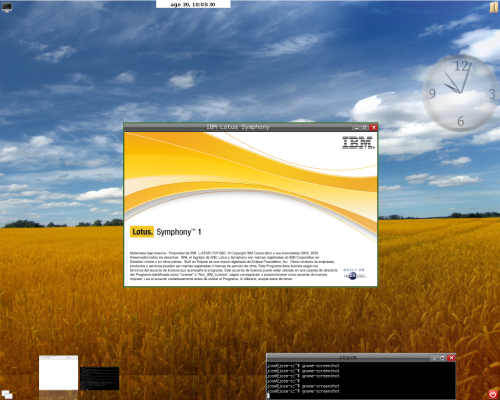 And the IBM Lotus Symphony 1.1 office and home productivity suite will start up giving us a glimpse of its magnificent design user interface with its initial Home page tab. 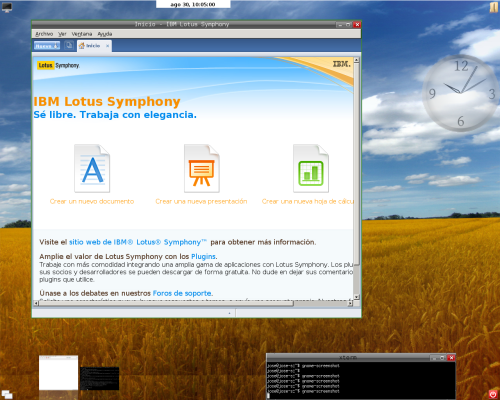 After that an user is satisfied that the IBM Lotus Symphony will effectively execute under GNU/Linux SymphonyOne 2008.1 under the root or super user account, the user should close the office productivity application and log out of her/his root account. The IBM Lotus Symphony 1.1 application will be available from the menu that pops up upon the user selecting the left, lower corner icon with her/his pointer.

Although there will not be an icon (large S) for Lotus Symphony from the pop up menu, the user will be able to read the name of the application. Selecting the Lotus Symphony with the pointer will start the office productivity suite as an regular user --the preferred way, of course. 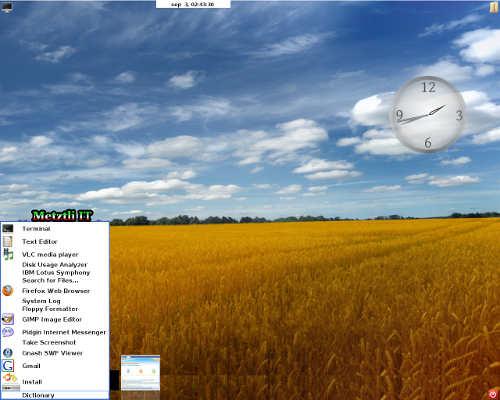 If you can not see the name of the IBM Lotus Symphony application, please reboot your SymphonyOne operating system and select the left, lower icon reading its subsequent pop up menu with care. As a matter of fact, any applications installed from the upper left icon subsequent menu, will appear in the equivalent lower left icon pop up menu. 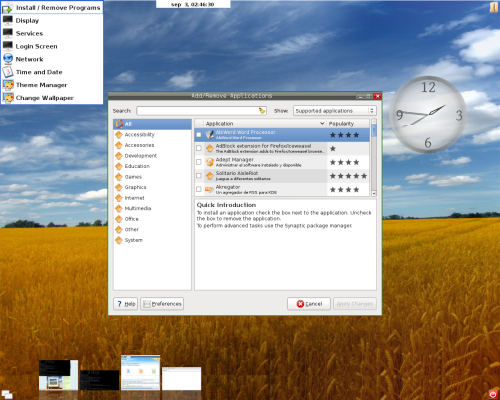 There are some issues, of course, given the fact that Symphony office productivity office suite is not officially supported in other than GNU/Linux distributions: Red Hat, Novell SuSE, and an Ubuntu beta release.

For instance, one issue that I experienced is the MOZILLA_FIVE_HOME environment variable. Thus the built in browser was not functional due to that error. 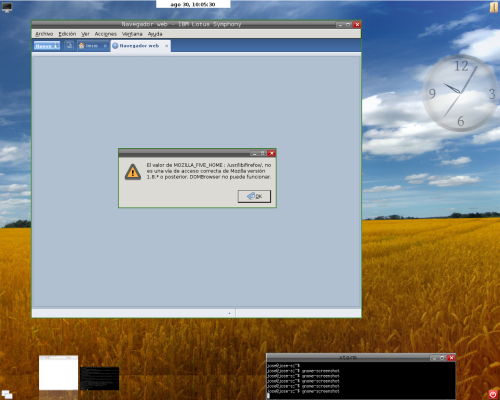 Please do not hold me or Metztli Information Technology responsible if the information provided here does not achieve the desired result. The information is provided AS IS and with the hope that it may be useful to the Internet community --especially the SymphonyOS users.

Notwithstanding, There is no implicit or explicit guarantee that the the information presented here is accurate --even though due diligence was exercised during the procedure. Accordingly, if an user(s) decide to implement the procedure described here she, he, or them, do so at her, his, or their own risk. You have been forewarned.