Under my Linux Debian environment there is a small shell oriented utility that is called youtube-dl that will download the youTube video that you provide as argument.  For instance:

Well here are some instructions that will permit you to download youTube files from within your OS/2 (or its reincarnation, eCS ), thanks to GNU General Public License software like Python, ported to OS/2 by Andrew MacIntyre and to Ricardo Garcia Gonzalez's Python script  that enpowers the user to fetch the videos.

And yes, I should not forget that what makes Python and the youTube-dl script to function under OS/2 is the (also) GNU GPL EMX enabler by Eberhard Mattes.  Is not the collaboration enabled by GNU's GPL wonderful!?

We begin by downloading the emx runtime for OS/2 from the Hobbes archive site, needed as the enabler --without it none of what follows would be possibe: emxrt.zip.

Further, the need for an shell is necessary.  Minimally, you will need sh.exe, that you can extract from the Hobbes Public Domain of the Korn shell or from an older but excellent version of the above. I will be using the latter older version for this exercise. (UPDATE 12-21-2016; have not tried it but there is mksh recently available

Then we are ready to work.  Open an OS/2 window command prompt; by default your location in the OS/2 file sytem will be at the root drive.  I will assume for our purposes that your root drive is E: (where my virtual image of Warp 3 resides).  Proceed to create a working directory, then: 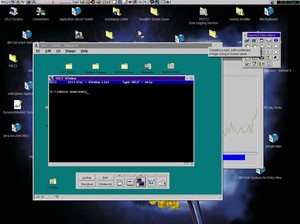 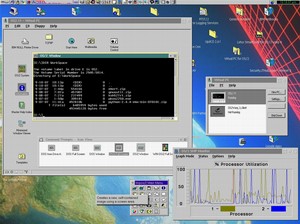 Yo will notice an extra file, the PkWare free version of the OS/2 native utility pkzip.exe; of course, you may use any other extractor but make sure that you know how to extract directory paths also.

Thus, we begin our process.  We change directory to WorkSpace and proceed to extract our pkzip.exe (that I have highlighted); 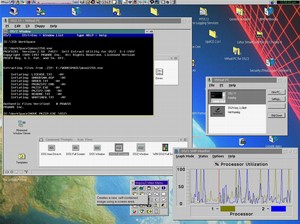 As illustrated, we move the pkzip.exe utility to the OS2 directory so that we can execute it from anywhere in our directory structure.

Next we go back to the root drive E: and proceed to extract the highlighted EMX runtime: 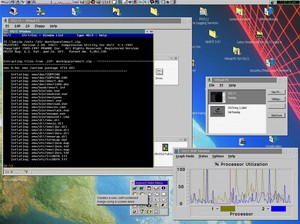 So we have created a directory called emx where we will install all our utilities to make our youtube-dl work.

Note that if you want an OS/2 command window  larger than the default but not full screen, try:

Proceed to change your directory to emx by typing: 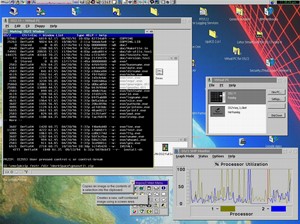 The specific files that we will need for the specific task are among those highlighted; notwithstanding, becoming familiar with those unix utilities, will allow you to naturally use the powerful and free Linux operating system --you will not have to enter "activation codes" to use it, you will have higher resilency to viruses, and your environment will be much more stable than proprietary offerings.

We continue and extract the next file: 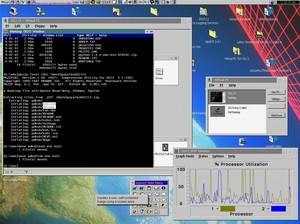 Again, the specific files that we will need are highlighted and, before extracting the Python binaries, let us move the highlighted files to their proper directories on E:\emx\bin and E:\emx\dll,

as illustrated in the above screenshot.  Additionally, once we are at it, let us move the files from the prior extraction of the file gnusutil.zip:

thus we move the two only dll files, gnuregex.dll and gnushu.dll,  in the exe directory to the proper directory E:\emx\dll.  We do the same with env.exe, moving it to E:\emx\bin directory: 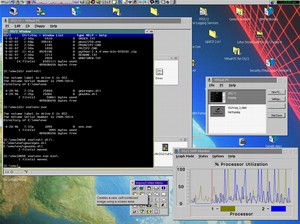 Now we are ready to install the Python binaries by extracting the appropriate file: 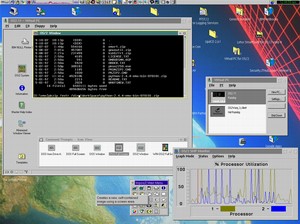 And, as above, we proceed to move the files with an .exe and .dll extension to their proper emx directory structure: 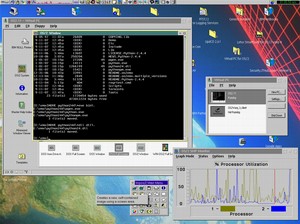 That is it!  We only have to copy and paste Ricardo Garcia Gonzalez's Python script into the OS/2 E.EXE or EPM.exe editor and save the file with a name like youtube-dl --because we like Unix short and cool names , do not we?!  But before we save the youtube-dl file in the E:\emx\bin directory, we must add something to make it execute under OS/2 --remember this file comes from Unix/Linux conventions.

Opening the original Python script in an OS/2 editor, it can be seen that only the modification of the very first line that contains the "sh bang" needs to be modifified to suit the OS/2 environment.

In other words, we change the very first directive: 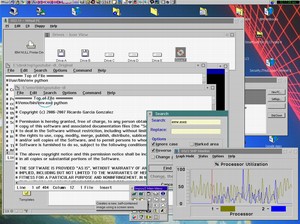 remember above that we moved the env.exe and its supporting gnushu.dll into its respective directories under emx?

Ok, so after the modified file is saved in the directory E:\emx\bin, we are ready for the final phase of our exercise.  Let's create an OS/2 commad file so that we do not have to alter our important OS/2 CONFIG.SYS file; let us call it myPython.cmd and save it under E:\OS2 directory like we did with the pkzip.exe file, remember? 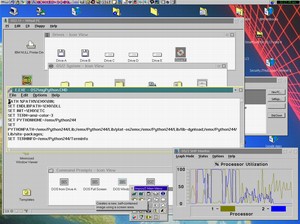 As an aside, under my OS/2 2.11, I had to actually modify my CONFIG.SYS because the oldie operating system did not support dynamic LIBPATH environment variable statements that we enjoy in OS/2 Warp 3 and above.

and the appropriate variables were set.  We need to verify if the Python interpreter is working since the youtube-dl script depends on it.  Hence I proceed to do that very thing and enter: 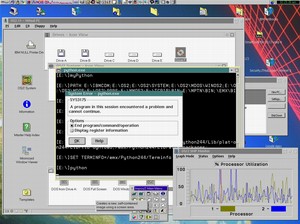 Humm, I had just tested the shell and it worked...

Selecting the additional information radio button on the radio message, I can see that it is due to the DOSCALL1.DLL.  Warp 3 and above have an improved, totally modern equivalent that I should try best. 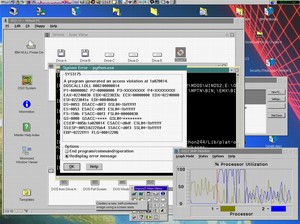 So I fire up my OS/2 Warp 3 Connect and perform the same procedure on as on my 2.11 version of OS/2.  I also add an extra line to my file myPython.cmd, and rename it to myPythonMod.cmd, so that the shell utility, sh.exe, needed by the youtube-dl will start on another OS/2 window shell with an nice title: 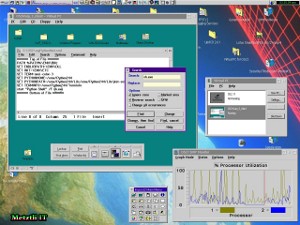 Now I open an OS/2 windowed command shell and enter:

The environment variables being set are echoed to the screen and at the end of myPythonMod.cmd the directive to start a sh.exe utility with an title is honored --openning another window with the sh.exe prompt: 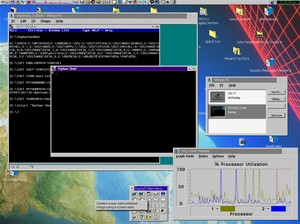 Finally, we are ready to download our youTube flash video.  Yes, there is some work to set up but after it is done you can simply type as I will now do as an very simple example: 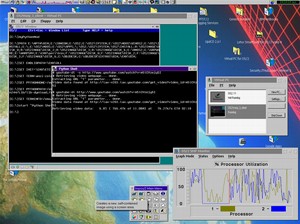 Well the sh.exe may be replaced with ksh.exe and you would have a more friendly environment, needless to say.  Further, as can be deduced from the virtually infinite creativity of the open source communities --that can not be matched by proprietary vendors who spread fear uncertainty, and doubt (FUD)-- there are other ways to achieve the same goal.

Since I use as my default the EMX base for Unix/Linux like behaviour in my OS/2 environment, this is my approach only. I had pondered about the feasability of youtube-dl on OS/2 for some time now.  I had to wait for a long job to finish on another machine  and decided to use my time enabling OS/2 for one more modern use.  Indeed, I have come to the conclussion --hope that you share it with me-- that OS/2 rocks!

Please do not hold me, or Metztli Information Technology, responsible if the information provided does not work in your environment --I do not guarantee that the procedure will perform adequately and may even render your machine unusable.

I have provided the information in good faith hoping that other computer users (especially OS/2ers) will benefit from it --but if you try it you do so at your own risk.

This entry was posted by jose and is filed under OS/2.

where can i get this cool desktop background image
from your screen shots ?

The youtube video was only an example dating back to the time I created the post; the main point was to show the viability of OS/2 to download youTube videos with the Python script.

The background image that you are referring to is from the collection that came with OS/2 Warp Server for eBusiness (WSeB). OS/2 is not open source software (OSS); hence, the image is proprietary and can not be distributed freely. If you are interested in signing a petition to have OS/2 open sourced, you may find further information at http://www.os2world.com/petition

Great post and OS/2 is still alive. Any updates on this? Tahnks