Now that IBM's Lotus Symphony Beta 2 has been released, users of the

The procedure for uninstalling IBM's Lotus Sympony first beta requires, of course, to obtain root or super user privileges in your Linux environment.  Accordingly, if the default path for installation of Symphony was accepted,  the office suite will be found in the directory

Also, at that location there will be a directory named _uninst where the Linux  executable uninstaller.bin will be found, in addition to other supporting files.

After the user has acquired root or super user privilege in her/his environment,  the user might simply enter at her/his command shell:

Alternatively, the user might want to change position to the _uninst directory:

and subsequently uninstall by typing:

For the Red Hat based CentOS5 Linux distribution, the uninstallation procedure does not involve any preliminary tasks to be successful.  On the other hand,

ebian and Novell's OpenSuSE 10.3 might require some preparation for the uninstallation of IBM Lotus Symphony to be successful.

Please, only perform the following two procedure(s) if you can not uninstall the IBM Lotus Symphony first beta application normally by executing the uninstaller.bin, as above discussed.

During the installation of the first IBM Lotus Symphony beta, there will be a directory created by the installation routine.  It is called InstallShield and, since the user has acquired root privileges to install Symphony, InstallShield  might be located under the root or super user home directory.  It should have the following structure and should be relative to your home directory –assuming that there is from where you installed Symphony:

Under at least one Debian distribution, that directory will not have that structure but:

and will not allow the user to uninstall the first beta of Symphony. One way around the issue is to create the subdirectories above as:

Assuming, of course, that the user is at the location where the directory named InstallShield is found.  The option -p above is to create the directories ibm and Symphony at once.

After the command ended successfully, proceed to uninstall the IBM Lotus Symphony first beta.  You should be able to do it now and you can proceed to install Symphony beta 2.

OpenSuSE 10.3 and the need to export variable for graphical uninstall.

OpenSuSE 10.3 uninstall issue continues to depend on the variable needed to install the IBM Lotus Symphony first beta.  Accordingly enter at your shell command prompt:

After pressing the ENTER keyboard button, the user is able to uninstall the Symphony beta 1 by following the uninstall procedure discussed above. 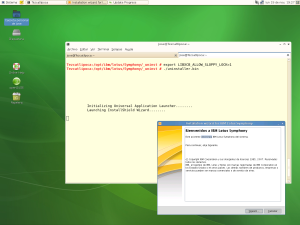 Among the differences that you will find after the Symphony beta 2 installation is that instead of three icons for the three office suite applications, there will be only one. 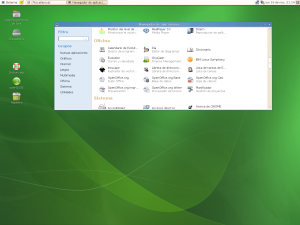 Please do not hold me or Metztli Information Technology responsible if the information provided here does not achieve the desired result.  The information is provided "AS IS" and with the hope that it may be useful to the Internet community.

There is no implicit or explicit guarantee that the the information presented here is accurate.  Nor should there be the implict or explicit guarantee that the procedure will not leave your machine in an unforseen unusable state.  If an user(s) decide to implement the procedure described here she, he, or them, do so at her, his, or their own risk.  You have been forewarned.