Having elaborated on the installation issues, and work arounds, of the recent Beta 4 (B4) release of IBM lotus Symphony for the Linux operating system, I will now elaborate over what seems to be an strategic addition to Symphony: the availability of an early implementation of the WebSphere (language) Translation Server (WTS) plug-in.

Symphony's WTS plug-in, if further debugged and implemented properly by the IBM Lotus developers, is one of those tools that highlights the importance of open standards --if the Internet computing platform is to carry into the future the potential to connect human beings by bringing down language barriers.

Accordingly, once I had Symphony B4 installed under three Linux distributions, the next logical step was to test the Symphony's WTS plug-in, since I had elaborated briefly about the adequate --for an early beta release-- of one of the language plug-in modules, in above referenced blog post.

Interestingly, the Lotus Symphony WST plug-in is advertised as a fully functional implementation and capable of translating from/to English-Spanish and English-Chinese. Having installed the Spanish language plug-in as described in prior blog post, I wrote a simple 4 line rhyme/verse popular in some parts of México.

I wrote it, of course, with Symphony B4 and uploaded it online in the ODF format (with an extension of odt), and also formatted in HTML --so as to test IBM's WebSphere Translation Server: Machine Translation Demo online.

Hence, online there is the ODF file of the name unaMexicana.odt and, equivalently, the HTML formatted named unaMexicana.html. To illustrate, since Lotus Symphony has been installed under my GNU/Linux Debian distribution, selecting the ODF file with my pointer prompts me if I want to open it with Symphony: 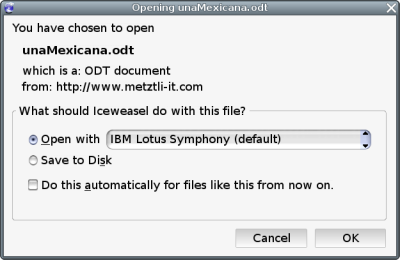 Below is the Spanish text, as written in Symphony B4:

And below is the approximate translation by IBM's WebSphere Translation Server: Machine Translation Demo online when I fed it the URL address of unaMexicana.html:

A Mexican who fruits sold
Melon and watermelon ¡That Mexican!
And every day
That Mexican One..., went out and went out.

Close in meaning but needs refinement nonetheless. For instance, it could be made better by the addition of blue (and) bracketed entries and the deletion of the red-crossed word: 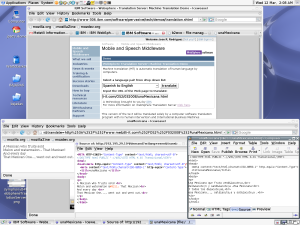 Well, but I come around to answer whether this early Symphony B4 WTS plug-in module achieves an equivalent result when fed Symphony's own data, written in Spanish, of course, and with its own language plug-in module. I should note that Symphony B4 WTS plug-in attempted to translate into English from Spanish but was not able to do vice-versa. Anyhow, this is the result: 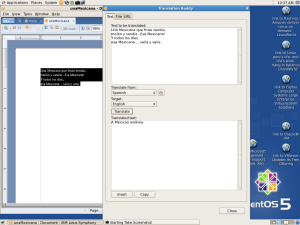 It simply shows that whereas the current Lotus Symphony B4 WTS plug-in implementation might be able to translate one or two words at a time from Spanish to English, it is not ready to be fed a simple four line stanza --as can be seen in the lower window.

NOTE: Although due diligence has been applied, the ODF/HTML files, are made available for testing/evaluation purposes on an as-is basis. Those files, among others, only reflect my own limited testing --as expounded above-- and the potential user that manipulates those (files) assumes all risks. Accordingly, please do not hold Metztli IT responsible if unforseen effects are experienced. You are not obliged to use the information and/or data provided.